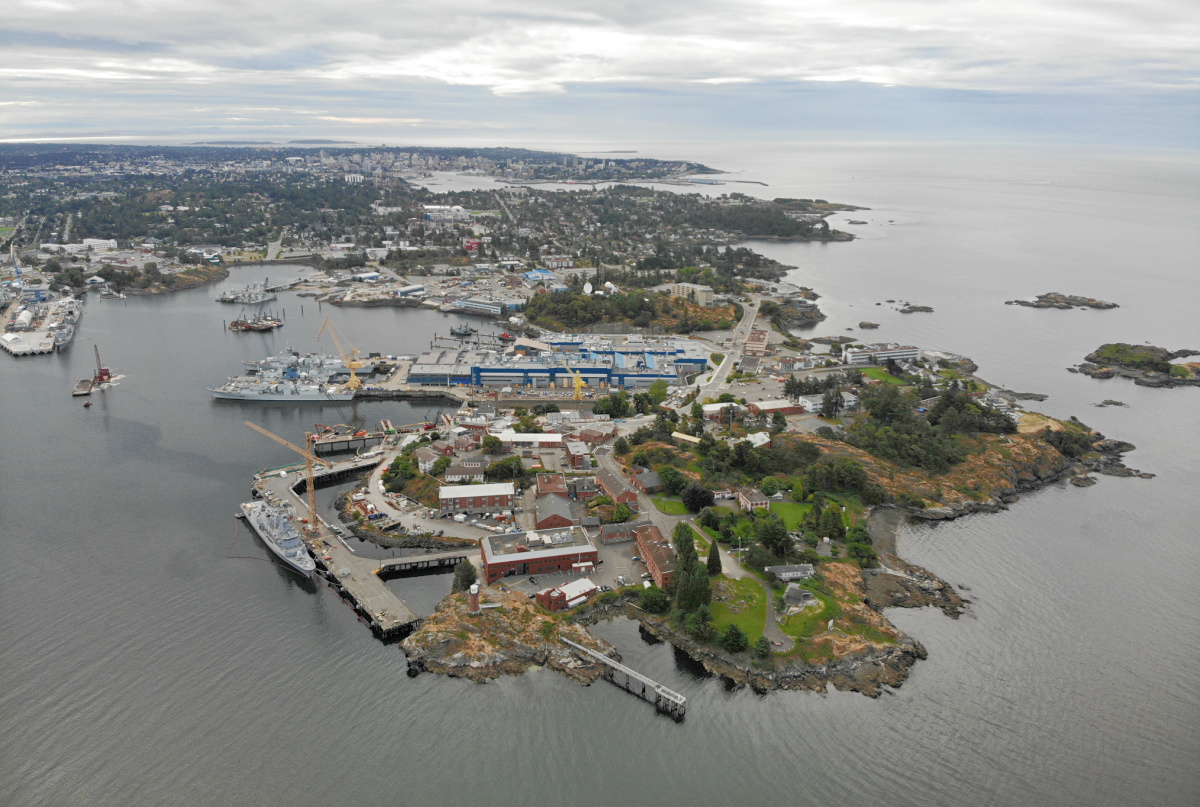 “My biggest priority is to respect the dignity of all people, ensuring inclusivity and an equitable environment.”

CFB Esquimalt has a new Base Commander. Captain (Navy) Jeff Hutchinson joined the base in 2021 following a previous posting as Director of Naval Strategic Management at National Defence Headquarters in Ottawa.

“I think as a Navy we’re getting better at encouraging a diverse, inclusive workplace,” he says, “but it’s important work to continue doing.”

In 2016 Captain (Navy) Hutchinson became commanding officer of HMCS Winnipeg and in 2017 deployed with HMCS Ottawa to the Indo Asia Pacific region. He describes the experience as the pinnacle of his career. “It was very successful and we enjoyed excellent morale, we were effective, we solved challenges and we pulled together to do so.”

What drew Hutchinson to a leadership role within the Navy was the personal satisfaction he’s always gained from making a difference in someone’s life. A good leader, he says, is the person focused not only on accomplishing the mission, but ensuring your subordinates feel valued and supported.

“There’s a fine balance. You don’t want to focus on one over the other. There are going to be times where the mission is going to come first, and we’re going to ask people to give 100% effort and that’s necessary. And then there are the times when you have to recognize you need to back off and allow people to recharge and refocus.”

SIPP welcomed CFB Esquimalt as an Honorary Member in 2021. Home of the Pacific Naval Fleet, CFB Esquimalt is the third largest base in Canada (by population) and supports Maritime Forces Pacific (MARPAC) in its role of generating and maintaining multi-purpose, combat capable maritime forces.

It is also the third largest employer in the CRD with local spending impacts estimated at $611.3 million. The base employs about 6,500 people. In any given year more than 2,800 military personnel will be trained at Naval Fleet School Pacific.

We asked Capt(N) Hutchinson to tell us about his experience thus far in his new role, and about the role the Navy plays in helping grow a prosperous region.

You’re new to Vancouver Island, having joined CFB Esquimalt this past summer. What have been your first impressions of Greater Victoria?

Well I’m both new and not new. I started my career here at Royal Roads in 1991 and have been back a number of times, whether for coursing or a full posting (~2 years in a job). Most recently, I was here in 2016/17 when I was Commanding Officer of HMCS WINNIPEG. This said, this is the first time since 2013 that I’ve been back with my family. I’m not sure there’s anything that’s struck me (us) as particularly out of the norm relative to past experiences. Certainly the CRD progresses – traffic gets better because of the McKenzie interchange, Esquimalt is being built up and e-bikes can beat me down Quadra St.

CFB Esquimalt has become an Honorary Member of South Island Prosperity Partnership. How do you see the two organizations working together to benefit the region?

One of the driving forces behind the SIPP is enabling our members to build a life in the Greater Victoria Area. Supporting the families and households that make up the Defence Team of CFB Esquimalt underpins much of what we do at the Base and we look forward as an organization to contributing to this worthy and essential effort.

As an honourary member of SIPP, our role is different than other members in that the Base does not have voting rights or authority over bylaws or the election of Board members. However, we are grateful for this opportunity as a key stakeholder to engage in the economic and development discussions that are an essential piece of how the Base operates in the communities in which we live.

What role do you see CFB Esquimalt playing in helping grow a resilient, robust economic future for our region?

The Base will continue to provide a foundation for the region to expand and diversify.

We are one of the largest Canadian Armed Forces bases in Canada and the third largest employer in the CRD. It’s estimated that the Base, both directly and indirectly, accounts for local spending impacts of $611.3 million and, with 6,500 military and civilian employees, has an annual payroll of $440 million.

CFB Esquimalt is also transforming as it prepares to support the Royal Canadian Navy’s Future Fleet with over $1 billion in infrastructure upgrades and environmental projects underway.

We offer diverse employment opportunities – 38 different careers within the RCN and civilians are employed in a wide variety of fields from science and administration, to trades and accounting.

You’ll be building upon the work of your predecessors while bringing your own perspective and experience to your command. What unique skills or fresh perspectives do you bring to your new role?

Each Base commander, I believe, is a variation on a theme. That is to say, each is a sound and capable leader, able to lead the Base to execute on its mandate to provide Support for All. The variation is in the manner in which this is achieved. One can be very finance focused while the next can tend toward a humanistic, people-centric approach, etc., all while ensuring that foundational activities and tasks are achieved. My focus is very much on the people who form our One Navy workforce and their families. In a pressing time, I think we’re really going to be challenged to succeed if the people who make the institution go aren’t well-led and well cared for.

And there are tons of factors that make this space particularly complex in Victoria: cost of living; availability of support resources; and availability of accommodations.On top of that, there are the challenges that are common to the military experience everywhere:  deployments and general time away from home; personal readiness; personal well-being; work/life balance; diversity; inclusion and having policies and procedures in place that enable all of it. I’m really very committed to making progress.

Are there any projects or goals you’re most excited about implementing and achieving? You’ve talked about the importance of creating a welcoming and inclusive culture. Can you elaborate on this?

I like to think of myself as a consolidator. What I’d most like to see at the end of my tenure, from a business process point of view, is a Base that is doing the right things, for the right reasons, and doing them very efficiently and effectively. Not unlike Gordon Ramsey’s advice to restaurants on Kitchen Nightmares: don’t try to have every dish on your menu; have the things that you do well on the menu and do them very well.

From a leadership development perspective, the manner in which we do our business is important. I have expressed this as (and I’m sure I’ve stolen this from someone else): as you go through your time as a leader, look back at what you’ve left behind you –  if what you see is all wreckage and salted earth then whatever you’ve achieved wasn’t worth it. But if you met all your objectives and look back and see that people have grown, and they walk along with you, heck, maybe some have even surpassed you, then you’ve done it right.

What I’ve said above is part of the welcoming and inclusive culture: a positive and progressive work environment that considers the well-being of its people while also achieving its mandate is a start. The rest I’m still struggling to define exactly. In my change of command address I referenced one of our core principles: that we have an “obligation to humanity to respect the dignity of all persons” and noted that our doctrine doesn’t qualify that expectation.

It’s not “respect the dignity of all persons so long as they share the same religious views as me” or “so long as they share my views on relationships” or “have the same colour skin as I do”. No, it’s”respect the dignity of all persons,” full stop. And that doctrine has been in place since 2002. And yet there’s evidence that we’ve not been living up to that expectation.

So I would say that my great dream would be, from a cultural perspective, for each and every member of CFB Esquimalt to check our biases and prejudices, to adjust our thinking and the manner in which we interact with people to get closer to that ideal: respect the dignity of all people, without caveat, every day. This is perhaps not a goal to be achieved by tomorrow. But I’m committed to getting closer.

How will you use lessons learned from the challenges of the pandemic to further build resiliency and strength in the naval community?  What lessons have most profoundly impacted you since the pandemic sent shockwaves through our community and economy?

For me, the great lesson will be about individual balance and prioritization. I believe that for many people, the pandemic and the impacts it had on people’s lives really brought what’s important into stark reality. It may be that people were working while trying to parent and trying to homeschool children and be a decent spouse. I know that I went to bed many nights feeling like I’d failed in all those categories equally and woke up in the morning panicked about all I didn’t get done the day before. It wasn’t until I realized that I was just a human being, with certain capacities and limitations — and prioritized within those boundaries — that I began to survive. I think extrapolating those lessons to the naval community would be of benefit to us as an institution.

When pressed by an unprecedented world event, it’s really important to focus what resources we have on absolute core, priority functions and accept that the remainder may not be done as well as it might have been in another time and circumstance, and most importantly, to make not being perfect at everything Okay.

When you envision our lives in 2040, what do you hope for, both for our region and our society when it comes to our economic future?

I honestly don’t have the foggiest. I’m just trying to get us five years down the road. Okay, okay – given challenges we’ve seen in the world throughout the pandemic, and that were amplified by the recent impacts of flooding in the lower mainland, what I believe is necessary is a focus on local self-sufficiency to the degree possible.

I think a reasonable goal for the future is to reduce that external dependency as much as possible. I believe the tighter you make the radius of dependency, the more insulated we will be from shocks to the system. But I’m a lay person, to be truthful – I drive ships and fire torpedoes, so take this with a grain of salt.

We are grateful to be doing our work on the territories of the Coast Salish and Nuu-Chah-Nulth peoples.

We respect and honour the Indigenous peoples who have thrived for millennia as the innovators, traders and stewards of these lands. We deeply value this connection.