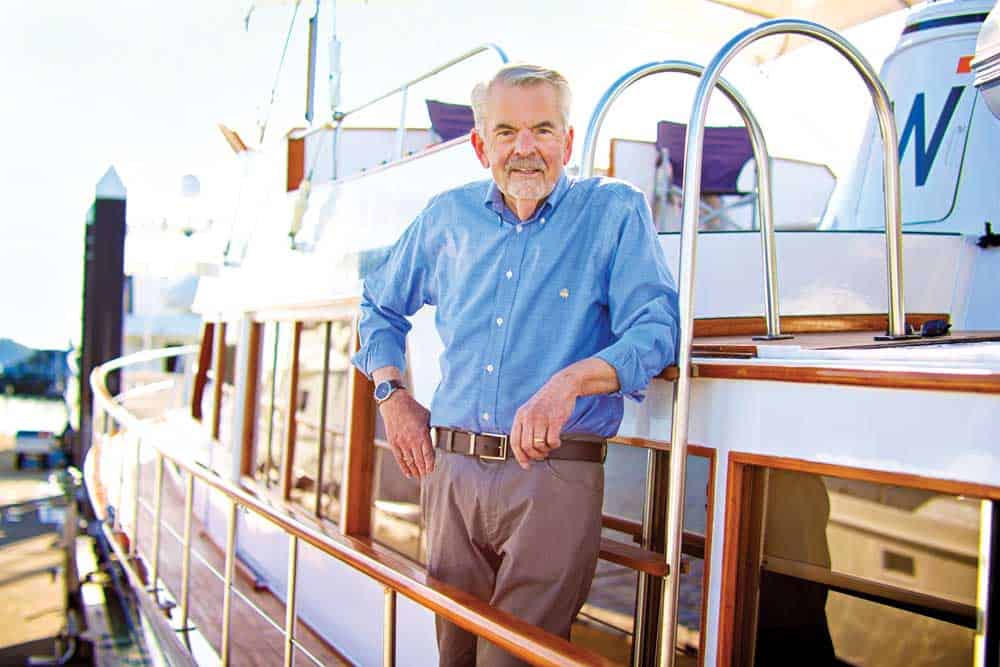 My tribute to Michael Weston: The hidden impact of a true business leader

By Dallas Gislason August 8, 2022 No Comments

I was saddened to learn that Victoria business leader Michael Weston passed away. Since then, I’ve been reflecting on Michael’s impact on me through his mentorship and support, and his impact on our region as a business leader who authentically represented what leadership truly is.

First, let me describe Michael’s impact on me. As many in the Victoria region know, South Island Prosperity Partnership (SIPP) was launched in 2016 as a regional alliance of municipalities, First Nations, post-secondaries, industry associations, chambers, nonprofits and private businesses. The mandate? To create a prosperous regional economy where the next generation can build careers and lives.

What you might not know is that SIPP would never have been created without Michael Weston.

Following several attempts to create a regional economic development mandate, efforts to create SIPP started in 2013 as the region faced stagnation coming out of the 2008 financial crisis. As a solution, the Greater Victoria Development Agency, a committee under the Victoria Chamber of Commerce, developed a proposal to create a new regional agency with more robust and equitable support from regional stakeholders and governments. Michael Weston chaired that committee, and I reported to them as their only “employee.”

Michael was very hands-on with this work and took it very seriously. He and I met with several of the region’s Mayors at the time, including the Chair of the CRD and their CAO. We had some traction and support from these conversations — but it wasn’t quite enough. After months of meetings that felt as though they were headed in circles, I may have lost my resolve if it weren’t for Michael’s patience and steady reassurance. I kept going entirely due to Michael Weston’s reassurance and support.

At one point, Michael offered his own money to the Chamber so we could continue with the work. He would call me on the phone to provide encouragement and stop by my house to see how I was doing. At Christmas, he would bring gifts for my family.

Long story short, our luck changed after the 2014 municipal election. Several of the region’s mayors invited us to present our new regional collaboration model, which turned into SIPP, which launched in April 2016.

Another part of this is the instrumental role Michael played in growing SIPP. His company Cube Global Storage became our first business member. While we now have 75 members, back then, we had 29 — only 7 of those were businesses, and only two of those were First Nations. Michael knew the importance of ensuring regional buy-in, so in the years that followed, he brought several First Nations to the table himself. And I mean literally. He would often pick someone up who needed a ride and drive them to a meeting or SIPP event.

My career and life would not be the same without Michael’s wisdom and mentorship.

This leads to the second part of my reflection: What is a business leader? To me, there’s a vast difference between “being a leader in business” and someone like Michael Weston. Yes, he was very successful in business; he had started, co-founded and partnered in many companies. But unlike many other business leaders of his stature, Michael showed leadership, not just in business but in how he lived his life.

Let me give an example of the difference.

A friend of Michael’s had a son who fell tragically ill and had to undergo treatments in Vancouver over an agonizing and prolonged period. At one point, several months into this, Michael stopped by the hospital ward to thank the staff for caring for his friend’s son. He then anonymously sent a sizable donation to the hospital foundation through one of his business partnerships and told them which ward he wanted the money spent on. I didn’t realize until many months later that he told nobody about this, not even his friend (who is now aware, by the way).

To me, this is what a leader is. Someone who does what is necessary without asking for credit or even forgoing the credit entirely in service of the outcome or the team. Often, these acts of giving or sacrifice are what inspire people, which is, of course, a necessary aspect of leadership.

Being a business leader, therefore, is not about being seen to be a business leader — it’s about putting your community, your employees, your friends and family in positions to succeed themselves. It requires going beyond the charity event into the actions required to make a difference.

I’m sure my experiences with Michael Weston form only a small part of his legacy, but I wanted to share them as a tribute to his impact on the place we all call home and on the organization that I get to be part of now years later.

Thank you, Michael. May you rest in peace.

We are grateful to be doing our work on the territories of the Coast Salish and Nuu-Chah-Nulth peoples.

We respect and honour the Indigenous peoples who have thrived for millennia as the innovators, traders and stewards of these lands. We deeply value this connection.